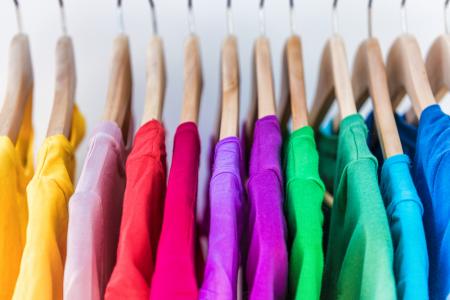 Many older homes are long on architectural details, but short on closet space. At the time historical homes were built, most individuals didn’t own more than a few articles of clothing, greatly reducing the need for closet storage.

The few items they did own were usually folded and placed in a trunk or a chest of drawers (also called a “clothes press”), or hung from a hook on the wall. (Did you know the hanger wasn’t even invented until the late 1800s?)

Later, as people needed more space to store their clothing, they began using the freestanding pieces of furniture that we call wardrobes, armoires, or chifforobes.

Modern houses have large closets in every bedroom because modern inhabitants typically need storage space for LOTS of clothing items and related accessories.

In historical homes, closets were typically used to store precious, personal possessions. These types of closets were often called cupboards and were usually found in rooms other than bedrooms.

Early closets may have also been private spaces in homes. Since most modest homes tended to consist of one open room—and even larger houses had only a few large rooms—closets were used to conduct private meetings, to dress, and sometimes to bathe (before indoor bathrooms were commonplace). They were also used for prayer and/or meditation and sometimes for sleeping.

These tiny rooms, which permitted uninterrupted study or private conversations, gave rise to the term “closeted,” meaning “in private” or “hidden from view.” They were often built on either side of the fireplace for warmth. Some closets even had a window.

The American colonists may have fought “taxation without representation,” but there is no hard evidence of a “closet tax”—a tax on Colonial houses “by the room” (which would have made the inclusion of closets an expensive proposition).

While this myth still persists, according to tax records and floor plans of some houses in the original 13 colonies, there is no indication that closets were taxed.

Buying a House With No Closets

If you fall in love with an older house with limited or no closet space, don’t lose hope. There are several creative ways to get the storage space you need.