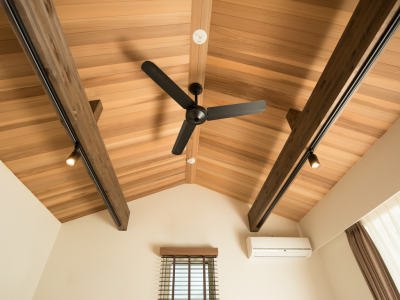 The Pros and Cons of Ceiling Fans

Long before air conditioners were invented, people have relied on ceiling fans to circulate air and make rooms more comfortable. In the U.S., rotating ceiling fans first appeared about 150 years ago and were powered by running water instead of electricity.

Fans have come a long way since then. What are some of the pros and cons to consider before deciding if you should add one to your home?

Ceiling fans are an easy and instant way to feel cooler in a too-warm room—or warmer in a chilly room. Just flip a switch or pull a chain.

Fans help you feel cooler by pushing air across your skin, speeding up what occurs naturally with sweat evaporation. This is one reason a fan has a better cooling effect in dry climates than in humid ones.

In hotter months, set a ceiling fan to spin counterclockwise, creating a downdraft below the blades. In the winter, you can reverse the fan blade direction. Then, warm air lurking near the ceiling will gently circulate downward around the perimeter of the room.

Fans do not reduce a room’s temperature. In fact, a fan’s motor produces a small amount of heat. One way to reduce added heat is to invest in a unit that operates on DC current and is more energy-efficient than the more common AC versions.

Fans are relatively easy to install and maintain, especially when compared to HVAC systems. And, compared to air conditioning, it costs much less to operate a ceiling fan.

If you have air conditioning, you can set your thermostat a few degrees higher and use a fan to save on cooling costs. Just be sure to turn the fan off when no one is in the room to avoid wasting energy.

Remember, using a fan without adjusting your thermostat setting will only increase energy costs.

Some ceiling fans are noisy, although more expensive models tend to be quieter. Also, the likelihood of fan noise increases with time, as screws may loosen and the motor becomes louder with age.

DC-type fans tend to be quieter because they use smaller and more efficient motors. Beyond motor noise, expect some “wind” noise as the blades move through the air.

Ceiling fans don’t require as much energy as other cooling methods and provide a greener approach to homeownership. According to the U.S. Department of Energy, three-quarters of all homes in the U.S. have air conditioners, and they consume roughly 6 percent of all energy produced in the U.S.

Also, ceiling fans don’t emit the harmful gases and pollutants that HVAC units can. They can be added easily to existing structures, reducing your reliance on air conditioning or allowing you to set the thermostat a little higher.

If you select a DC-type ceiling fan, you’ll conserve even more energy, and it will last longer, reducing the environmental impact of manufacturing a replacement unit. Also, a fan with longer blades will move air more efficiently and at lower engine speeds than a short-blade fan.

Ceiling fans can add a decorative touch to a room, and many include light kits. However, in terms of lighting options, a ceiling fan will be more limiting and may not fill a space with light compared to many dedicated ceiling light fixtures.

It can also be challenging to keep fans clean, especially if they are installed on high ceilings. Because they move the air, the blades and motor case will collect dirt and grime quicker than a stationary light fixture and will need to be cleaned more frequently.

If you’re sold on ceiling fans, make sure your ceilings are tall enough to install one in your home safely. If you plan to mount a fan on a porch ceiling, make sure it’s rated for outdoor use.

Your best ceiling fan will depend on your room size, aesthetic preferences, and cooling goals.