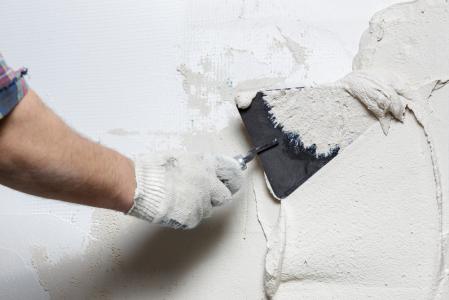 Until the late-1950s, plaster walls were the norm in new home construction. These walls are sometimes called “horse-hair plaster” because it was common to mix horse hair into the wet plaster to add strength, and to prevent cracking with minor flexing. Heating and cooling a house will cause plaster to expand and shrink slightly, so the hair helped keep the walls a bit more flexible.

How Are Plaster Walls Made?

Plaster, which is similar to concrete, is traditionally made with a mixture of sand, lime, water, and horse hair, and was applied with a trowel to a lathe backing. Early backings were made of wooden slats, nailed to the wall studs, with a space left between each slat for the plaster to seep in and “grab,” holding the plaster on the wall.

When plaster was pushed through the slats during application with a trowel, it mushroomed out wider than the space between the slats, and dried. This created an anchor to hold the plaster securely in place, on the other side of the slats.

Metal Mesh and Other Plaster Bases

Later, metal mesh was used as the backing material for plaster. The metal mesh allowed plaster to “curve” and create rounded surfaces, rather than the typically straight walls of the wooden lathe method.

Even later, a blue-board backing was used (similar to “drywall,” the slang term for sheet-rock or gypsum wall board) which would pull the water out of the plaster very slowly, allowing it to dry without cracking.

Although drywall can be used as a base surface for plaster walls, to achieve a good result, it’s essential to use a solution to deter the drywall from pulling water from the plaster too quickly.

Plaster ceilings use thicker lathes (when wooden lathes are used) to help support the weight of the plaster. Craftsmen sometimes doubled the lathes for ceilings. In overhead installations, gravity plays a much bigger role, compared to plaster used on walls.

Even if your home is from the correct era for plaster, a previous owner may have ripped out the lathe and plaster walls in a room, or a ceiling, or the whole house. It is fairly common for ceilings to be replaced with drywall because plaster ceilings were more likely to sag, crack, and break than plaster walls.

Should I Replace My Plaster Walls?

The plaster walls in your home may have cracks or may have some areas that are sagging or are in poor repair. There’s no need to worry, because your plaster can be patched.

Although many homeowners feel they must tear out plaster walls to insulate older homes, there are other approaches to insulating that do not require tearing out walls, including removing an exterior siding slat to access the space between the studs, or creating access from attic or basement/crawlspace areas, etc.

Unless the plaster is beyond repair, it’s better to repair than to replace plaster in older homes. Plaster walls are sturdy and historically accurate in the homes where they reside, and they are extremely messy to remove.

Plaster walls are also thicker than the modern drywall that is usually used to replace them—nearly twice as thick—which will throw off the woodwork, the window insets, and a number of other finishing details in any room where they are removed.