Should You Build or Buy a Barndominium? | Home Buying Resources | ABR Skip to main content 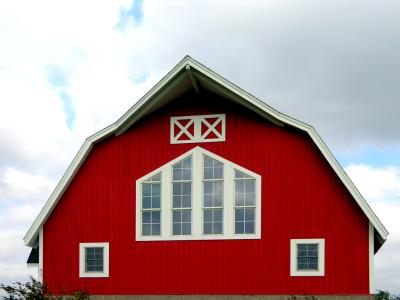 Should You Build or Buy a Barndominium?

Barndominiums are living spaces built in the manner traditionally used for barns and utility buildings. Affectionately called “barndos,” these structures usually use metal for the siding and roof. In addition, they are constructed using pole barn methods, meaning the exterior walls bear all the weight of the building.

Barndominiums initially gained popularity in rural areas as a way to add living spaces to workspaces, often incorporating apartments into barn lofts. Sometimes, the apartment provided living quarters while building the “real” house. In other cases, the space was used as a convenient “crash pad” when work hours extended or to incorporate guest quarters into a property.

Over time, owners began expanding the living quarters within the barn, often encompassing the entire second floor with a workshop or garage on the ground floor.

Today, barndominiums are becoming a popular home style with the entire structure used as living space. Instead of converting an existing barn, many owners erect their homes from scratch.

Why are buyers drawn to barndominiums, and what should you know about them?

Barndos usually cost less per square foot than traditional building methods. “Barebones” kits that can average under $30 per square foot are ideally suited for ambitious DIY homeowners who are willing to finish out the interior walls, doors, and windows themselves.

This means that a first-time buyer willing to live in the home while finishing it out can afford a much larger house than what’s available in the traditional arena.

A barndo can be ready in a matter of weeks, compared to the months required to complete a traditional stick-built house. Less time to build means lower labor costs!

An average size structure can be “in the dry” within a few days. Therefore, individuals who want to avoid renting (or selling an existing house while building) can quickly finish the essential areas first (bathroom/kitchen) and complete the rest of the interior as time and money permit.

Do you want wide, open living spaces? You got it! Want to add walls or knock some down? Can do! Do you want traditional rooms with hallways? That’s ok too. Since the exterior walls bear all the weight, barndos offer complete floorplan freedom.

Many barndominiums use spray foam insulation which prevents both air and moisture from entering your home. In addition to providing superior insulation compared to traditional fiberglass, foam also blocks mold and offers a shield from other allergens/pollutants.

Add energy-efficient windows, and your barndo can save you money on heating and cooling for years to come. In some cases, barndominiums can offer 25-50% energy savings over a traditional home!

A metal roof can last 40-70 years, compared to a typical 25-year shingle roof, and the exterior walls can use similar metal materials.

Metal buildings hold up to extreme winds and harsh weather and are often able to withstand earthquakes! For these reasons, storm and emergency shelters are frequently constructed in this manner.

Because a metal barndominium is less likely to endure the damage of a wooden structure, including a lower risk of fire damage, you can usually get better rates on your homeowner’s insurance.

With more people working from home and embarking on entrepreneurial pursuits, convenient access to a larger workspace can be extremely attractive. And living and working in the same building saves time and money while effectively eliminating daily commutes.

The Disadvantages of Barndominiums

Despite all the advantages, there are several downsides to buying or building a barndominium:

Not all lenders are eager to loan money for this type of non-traditional home, which may limit your ability to finance your build or purchase.

The barndominium of your dreams may be beautiful on the inside. However, without additional investments in upgrading the appearance of the exterior, your home may still look like a barn or a warehouse.

Although there is increasing interest in barndominiums, it takes a unique buyer to want to live in one, which means a smaller pool of potential purchasers if you decide to sell.

The Opposite of a Tiny House

To a large extent, the infatuation with barndominiums can be juxtaposed with the tiny home revolution. Think “big barn” instead of small living spaces.

Despite the differences, there are also some similar priorities shared by tiny house and barndo owners, including flexible interior layouts, potential energy savings, and DIY appeal.

Unfortunately, like tiny houses, some communities have made it difficult for landowners to build barndo homes. Nevertheless, with more flexible (or non-existent) planning and zoning rules, rural areas are still the most popular place to build and live in both of these alternative home styles.