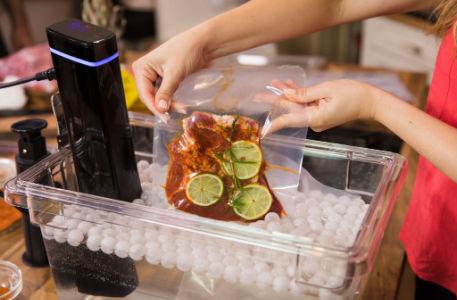 The Pros and Cons of 4 Countertop Cooking Appliances

Preparing healthy dinners quickly and efficiently is a daily challenge that appliance manufacturers eagerly offer to solve. But if you already own a microwave, a toaster oven, or a slow cooker, would you benefit from adding another cooking appliance to your kitchen? Perhaps. Here are four of the most popular alternatives, including their benefits and limitations, to help you decide if a new piece of equipment deserves space on your countertop.

Air fryers were introduced over ten years ago as a healthy cooking option. They mimic the effect of deep frying by using an electric coil and a fan to circulate super-heated air around the food. Convection ovens work similarly, but an air fryer’s cooking chamber is considerably smaller, which speeds up the cooking process.

Pros: Air fryers are versatile and quick, preheating and cooking foods substantially faster than ovens. They deliver on preparing crispy meats, seafood, and vegetables without any oil. Also, leftovers like pizza and wings won’t be soggy if reheated in an air fryer instead of a microwave.

Cons: Since the cooking capacity of an air fryer is relatively small, it can be harder to prepare large food servings. They also tend to be noisy and take more effort to clean than a roasting pan in an oven, especially if you line the pan with foil or parchment paper for speedy cleanups.

The French term sous vide means “under vacuum” and refers to a cooking process where vacuum-sealed packages of meats and fish, vegetables, and other flavoring ingredients are slowly cooked in a temperature-controlled water bath.

Pros: Sous vide cooking is healthy, moist, and flavorful. All the nutrients are preserved within the bags, and no butter or oil is required. Foods are consistently cooked to an even doneness without any guesswork or hands-on involvement, freeing you up to do other things.

Cons: Sous vide cooking takes longer and requires advanced preparation. Some flavors can become too intense when prepared this way. And some cooks miss being directly involved in the cooking process.

The first pressure cooker dates back to the 17th century, followed by various 20th-century stovetop models. Today’s multifunctional countertop versions provide all the benefits of pressure cooking plus options like slow cooking, browning, rice cooking, and other features, sometimes including air frying.

Cons: Pressure cookers are not precise, and learning to use them requires some guesswork. Also, since you can’t remove the lid during cooking, it can be difficult to monitor progress. But practice helps clear these hurdles.

Halogen ovens position a bright light bulb over foods sitting on one or more racks inside a clear glass bowl. A thermostat controls the bulb, turning it on and off while a fan circulates the hot air. Some halogen ovens double as air fryers.

Pros: Halogen cooking is faster and uses less energy than traditional ovens. It’s simple to monitor progress through the glass bowl, which is also easy to clean and dishwasher safe. Since no oil is needed, halogen cooking can be a healthy alternative.

Cons: Users complain that it’s easy to break the bulbs, and replacement heating elements can be expensive and difficult to install. Fortunately, most newer units have addressed this concern.