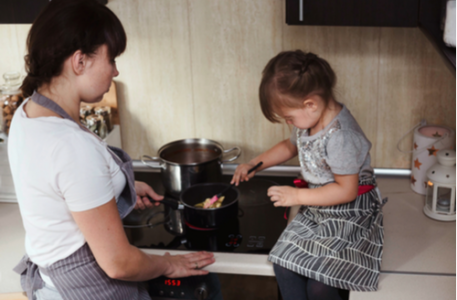 Is Induction Cooking Right for You?

Is induction right for you? Like any appliance decision, there are numerous factors to consider. Here are some of the most essential things to know about induction cooking:

Induction cooktops are powered by electricity, but it’s used to create an electromagnetic field that interacts with food and liquids inside a pot or pan, heating the molecules directly instead of transferring heat through an electric coil or a gas flame.

With induction technology, food starts cooking immediately. You don’t have to wait for a pot or pan to heat up before you begin simmering your food, which can shorten cooking times. Also, when you turn off an induction burner, cooking stops instantly.

Some types of pots and pans are unsuitable for induction cooking. Cast iron, enameled cast iron, and most stainless steel cookware are compatible. However, pots and pans made of aluminum, copper, or glass will only work if the bottom has a magnetic layer.

Try using a magnet to test a pan’s compatibility. If it clings firmly to the underside, it should work well. Also, keep in mind that pots and pans should be flat on the bottom, not warped, to avoid uneven cooking results.

When cooking with induction, you may need to change a few habits. For example, lifting a pan and shaking the food inside will interrupt cooking. Instead, you’ll need to keep the pan on the burner and stir your food while it cooks.

Also, suppose you’re accustomed to using a digital meat thermometer. You might need to switch to an older analog version since an induction system’s magnetic field may interfere with digital readings.

You may have heard that induction cooktops don’t get hot. It’s an accurate but misleading statement. You can set your bare hand on an induction burner, turn it on, and not feel any heat. However, if you’ve just finished cooking with that burner, some residual heat from the pan will have transferred to the glass surface.

Some induction units make a buzzing or humming sounds while used. The source might be an internal cooling fan, or it can be produced by certain cookware, particularly at high settings. Some users report clicking sounds from the electronics at lower settings.

Glass-topped electric cooktops are generally easier to wipe clean than exposed electric coils or gas burners, even though you still risk scorching food on the glass. That’s not a problem with an induction system since its glass surface doesn’t get warm enough to burn food.

You can also take preemptive steps and catch cooking splatters by setting parchment paper or a silicone baking mat under your pan.

Since induction burners only heat the contents in a pan and don’t transfer heat from burners under the pan, induction systems are more energy-efficient than electric or gas ranges.

Induction cooking systems have been around since the 1970s but are becoming a hot trend in smart home kitchens. Residential induction cooking tops won the ENERGY STAR® Emerging Technology Award for 2021-2022.